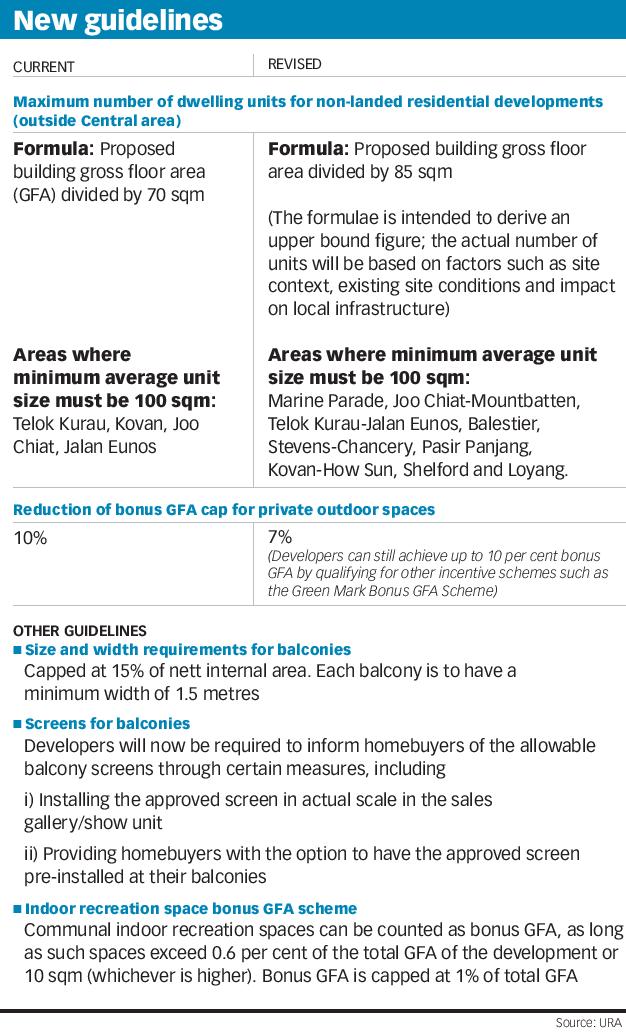 Balcony size capped at 15% of internal floor area for the first time
In the light of a growing trend of oversized condominium balconies, the Urban Redevelopment Authority (URA) moved to impose a limit on the sizes of balconies in private homes to no more than 15 per cent of the internal floor area of the unit


There are no such limits currently. The rules will come in for new condos with development applications submitted after Jan 16, 2019 and do not apply to units that are already built.


"We have also received feedback from home buyers who prefer units without balconies that it is challenging to find such units in the market, especially in new developments," said URA group director for development control Goh Chin Chin.

Explaining the oversized balcony trend, director at the Institute of Real Estate Studies Sing Tien Foo said developers naturally seek to maximise the amount of gross floor area (GFA) that they are allowed to devote to residential use.


Currently, the scheme allows developers to enjoy up to 10 per cent additional GFA if they devote the bonus space to balconies. This gave rise to units with large balconies and small interiors, which are impractical for residents. This is why the URA has lowered the balcony bonus cap from 10 per cent to 7 per cent.

The scheme was originally intended to encourage developers to provide outdoor spaces to residents and a better quality of living.
Associate Professor Sing said: "Cutting out this bonus completely is not a good idea because you get the other end of the spectrum where you compromise liveability."

Meanwhile, home buyers are still paying for each square foot of space, whether indoors or outdoors, and most home buyers would rather have more functional indoor space.


The URA said developers can still achieve the 10 per cent bonus by using other incentive schemes, such as the new bonus GFA scheme for indoor recreational spaces, where the cap is 1 per cent.
To begin immediately, this new scheme is intended to encourage spaces that allow more communal interaction among residents, such as gyms, function rooms, libraries, game rooms and reading rooms.

Developers will have to be more efficient in laying out their units now, given the lower balcony bonus.


To inform buyers of approved designs of balcony screens at point of purchase
The URA also said developers are now required to inform home buyers at the point of purchase what balcony screens they are allowed to install.
This addresses another common complaint arising from misunderstandings over the use of balconies.
Some home buyers are sold on the idea that they can convert their large balconies into an extra room by enclosing them in balcony screens, not knowing that developers must seek design approval for the screens from the URA first.

News edited from The Business Times, Channel News Asia ​
<< Back to News Homepage